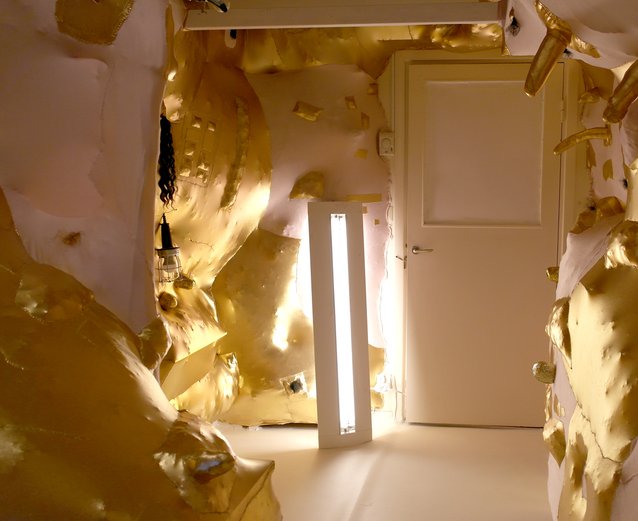 The Cell is the second part of a longer performance/installation/sculpture taking place at a studio at Platform Stockholm between april 2016 and september 2016.

The spot is chosen to pursue investigations into the concepts of boundlessness and transgression. The process involves letting the sculpture gradually "swallow its surrounding", by the act of covering everything in the space with fabric, sequins and fur.

There have been two public events:

And The Cell (formerly called Pink apocalypse) which was the second event and took place the 7th-9th October 2016.

I departed on this journey in the middle of April 2016. I ejected myself away from a sense of normality, proportion and comfort, seeking... something else, more, other. As the months have passed I have discovered desires within myself that I did not know I had, towards surrendering, giving in to my weaknesses or my selfishness and indulging completely in this manifestation of excess (and luxury). I have realized I am a materialist. I have also found new ways of interpreting the alien shapes, finding in them a strange familiarity to bodies, embraces.

Now, this place just is.

It is a manifestation of desires, overgrown, cancerous: perhaps the means of an individual (me, in a very practical sense), and a whole culture (us) to shield itself from the horrors of the world, whilst maintaining the peaceful and privileged illusion of normal everyday life (in the Western World).

It is a landscape, a surface to be explored. Underneath the fabric lies unused books, barely remembered; dried out stacks of pens; sculptures covered in protective plastic and dust. There are whole pieces of furniture and loads of crumpled newspaper pages that no one will ever read.

It is a cell, a container for mad dreams through which reality sometimes appears in enhanced clarity, sometimes is blurred and lost. A cell with padded walls, wandered over by fingers impersonating an adventurer from a past century, discovering a place left in ruins, a red desert.

This desert also represents the apocalyptic vision of a society possibly driving itself to the point of collapse. The wanderer discovers the present as if seen from a point lost in time, not knowing if this is something that is going to happen, is happening, or has already happened a long time ago.

THE WALLS OF THE CELL are covered with gold and pink fabric, stuffed into a flowing landscape. The surface is littered with black tufts, bulging shapes of fabric or gold sequins, rectangular shapes like buildings or monuments seen from above. The installation is in one way very literal: - it is a small rectangular "cell"-like space and it has been the artist's studio for the past 7 months. It is a form of isolation in terms of the double concept of being an artist, a privileged position that in some ways can be understood to distance itself from "the rest of society", and simply requiring that much labour that a self induced isolation  (and madness) was necessary. Its sheer appearance of luxurious abundance tends to insulate against reality.

In the previous piece "Surrender to the Golden beast" - shown the 11th of June, when the installation was c a 2 months "old"- the question was asked whether or not it is right or wrong to give in to the craving for luxury and or excess. This was meant both in terms of the apparent superficiality of the chosen materials and as a representation of the excess life style in the Western world. The answer, suggested by the artist (aka me), was that perhaps the choice of "giving in" was in part an attempt to recuperate a power position - which is tempting for those of us who feel powerless in terms of the sense of responsibility (and guilt) for how our way of living might affect others.  Perhaps "giving in" to this mysterious force of desire could infuse us with a new form of agency, a new "story" and collectivity.

In The Cell the experiment has been brought to its natural conclusion; the space is now completely enveloped in sculptural mass. It resembles a wonderfully intricate fantasy landscape, and yet, at the same time, a padded cell in a mental institution. It very concretely manifests, is, a space of isolation from the outside world, a soft and beautiful place in which all amazing things are possible. In this, it also manifests the promise of the Western world. It will always be better, brighter, the economy with grow, the prices on the housing market will continue to rise, now this is the trend, out with the old, in with the new. Rose coloured. Speckled with gold and glitter. But in the films that follow the physical installation we follow the artist's darker thoughts as the installation progresses. Is it right to isolate yourself, to indulge? Is it possible? How long is it possible?

The golden surface becomes fragile and riddled with bits and pieces of memories and fragments of news. The tufts of hair resemble smoke, something burning, the pink expands of fabric becomes a dry apocalyptic desert, the golden protrusions the death of life itself in face of greed. 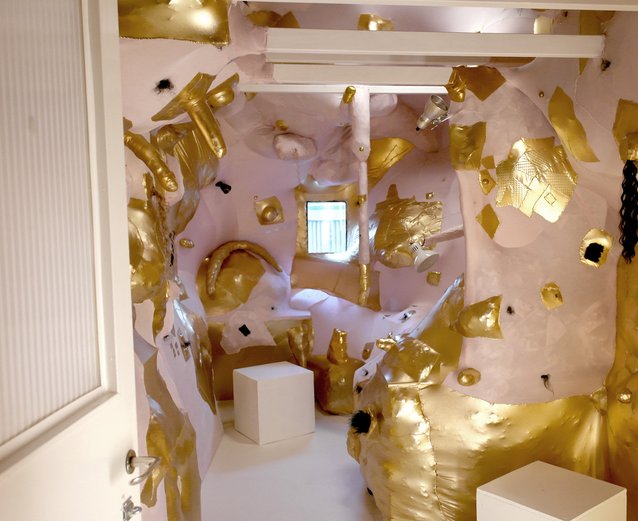 The installation also included two videos (see below). The text is in Swedish but English translation was available on site.